Was BBC's Doomwatch, made in the 1970s, the original Black Mirror?  What would Britain look like today if the Nazis succeeded in invading? We take a look at some of the best dystopian drama series that should be on your radar.

Whether it’s fears about the current international instability, or concerns over a post-Brexit Britain, we know we’re facing an uncertain future. This is probably why dystopian fiction has become one of the most popular genres of the moment and books such as Orwell's classic 1984 have been flying off the shelves since Trump won the election!

This is our pick of the best dystopian dramas, vintage classics through to 21st century offerings, and we recommend you watch them!

From nuclear war to electronic brain implants and a dictatorial British Prime Minister who has a scary resemblance to some of our current politicians and global leaders, Years and Years made some very audacious predictions about what to expect in the near future – but sadly, another series of this hit BBC drama wont be one of them according to its writers (although I am inclined to agree with the writers that this is for the best – why force a second series and risk this drama becoming less-plausible and instead too far-fetched?)

For decades, TV writers have been delving into the future, portraying some grim, uninviting scenarios for what the world has in store for us in the coming years. From robots taking over the world to alien invasions and zombifying plagues, as thrilling as many of these dystopian dramas have been, not one has felt as foreseeing as this tense 6-parter that seems to depict civilisation not too far away from our reality today. With global warming seemingly beyond repair and causing months of non-stop rain (much like the British summer 2019 has brought us so far), gated estates for the poor guarded by armed thugs, refugees crammed into hazardous, unhabitable camps and the far-right in power across the world, Years and Years could, at a glimpse, be mistaken for the 6 o'clock news rather than what is a cleverly written drama from the depths of writer Russell T Davies imagination. 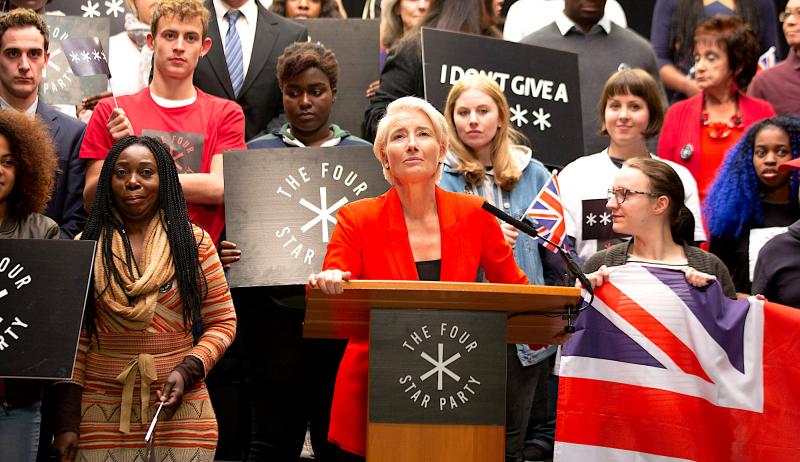 But of course, we are reminded it is fictional with a nuclear war between America and China, Monkey Flu is infecting Europe and microchips that can integrate your consciousness with the internet when inserted into ones brain – but one could say that’s my naivety at thinking these things as unachievable, I mean, we’d have probably laughed if someone told us that the host of the American Apprentice would be the President of the United States of America ten years ago, so who knows? Maybe Davies is onto something, even with the most unrealistic elements of this series. But whether you can allow yourself to believe these things achievable or not, it doesn’t distract from the true brilliance of this British drama that is reminiscent of the kitchen sink genre that took over our TVs in the 50's and 60's.

Its been deemed the best TV series of the year and critics have predicted that much like the 1980’s BBC drama Threads, it will become a classic. Whether it can be classed as dystopian is arguable with Chernobyl being based on the real-life historic nuclear disaster that took place in 1986, but with 454 active plants and a further 54 in construction across the world and rising global warming that put us at risk of catastrophic geographical and weather events, it’s impossible to forget the Fukushima disaster following a freak Tsunami and ignore the possibility of this happening again. So with that in mind, along with the on-going threat of Nuclear war, Chernobyl doesn’t just tell the story of the past, but acts as grim foresight for what the future could hold if an accidental or natural disaster was to happen – or, worse, an intentional act of war.

Alike to other true stories, as an audience we know how this story ends but it makes it nonetheless gripping throughout it’s 6 episodes which movingly humanises the events rather than glamourizing them like many film and televised biopics have done in the past making them more disaster-porn that a reflective depiction of the truth. The narrative cuts between the events, its aftermath and the court case which followed acting not as a campaign against nuclear power, the Soviet Union or even communism, but instead focusing on the true cost of the lies at the core of this tragedy. Craig Mazin, the shows creator, ensured that this was consistent throughout with dialogue that rings in your ears throughout with lines such as “acknowledging the problem is admitting you lied” and “the real danger is that if we hear enough lies, then we no longer recognize the truth at all”. It’s the lies, refusal to accept responsibility and mass cover up in Chernobyl that resonates today more than anything else, with echoes of Michael Gove’s assessment of expert’s comments and Donald Trumps tweets about global warming.

Chernobyl is a must watch across all generations even if defining it by genre is questionable. It’s not just moving and thought-provoking in the writing and performances unquestionably aided by the shows director, Johan Renck but it’s strikingly cinematic and complemented with an intense score that elevates the realism and engrosses you into the chaos. Some of the most popular dystopian fiction tales come from the idea of 'What If'? What if one of our most important historical events never transpired? What would the alternate reality of our world today look like today? What if Germany had won WWII and the Nazis controlled Europe, even the world? That’s the premise of An Englishman's Castle. Here the BBC gives us a vision of an alternate history 1970s Britain run by a fascist German government.

Kenneth More stars as the writer of the popular soap opera, "An Englishman's Castle", a period drama about a London family living during an imagined German invasion of Britain during the 1940s.

What’s fascinating is that he and the rest of the population don’t realise that this supposedly fictional TV show is actually true. Everyone is oblivious to the reality of England being under Nazi rule, which is hidden from ordinary citizens who believe ordinary English daily life still exists.

An Englishman's Castle toys with the incredibly frightening concept of truth and reality. How much does the average citizen truly know about how their country is governed. A thought-provoking watch.

Dubbed by creator Wilfrid Greatorex as "nineteen eighty-four plus six", this cult series is a nightmarish dystopian society in which the Home Office's corrupt Public Control Department (PCD) has absolute control over society. Everyone is being watched, monitored and controlled. They impose strict rationing of food, alcohol, and travel. Free speech is forbidden. Edward Woodward stars as Jim Kyle, renegade leader of a resistance movement in a totalitarian Britain. Kyle works against the Establishment – but his subversive activities aren't going unnoticed.

Charlie Brooker's acclaimed sci-fi series Black Mirror is described as "a twisted parable for the Twitter age" by Channel 4, and shows us the dangers of society's addiction to technology. Innovative and shocking, each episode is self-contained and tackles ideas such as reanimating a dead loved-one as a robot; rating everyone you come into contact with on a mobile phone app; and recording your daily life and replaying it whenever you like. No wonder it’s being compared to The Twilight Zone! Thrilling, tense and full of twists that keep you guessing, with some gorgeous visuals to boot, Black Mirror is a must watch series of dystopian tales if you’re interested in where we’re heading in the future.

Doomwatch was thought up by Doctor Who's Cyberman creators Kit Pedler and Gerry Davies.

This series, shown on the BBC in the early 1970's, focused on the work of a scientific government agency, responsible for investigating and combating various ecological and technological dangers. Like Black Mirror, the series aimed to install a "this could really happen to us" fear in the audience, alongside its dissection of the issues of the day.

Although a product of its time, Doomwatch tackled  controversial issues that remain relevant today. The dangers of genetic mutation, chemical dumping, nuclear power, pollution, and new medicine were investigated by the team, worries that the world is still dealing with today.

If you enjoyed Black Mirror, it may be worth giving Doomwatch a try. The BBC’s terrifying and realistically-filmed 1980’s drama about a nuclear bomb hitting Sheffield is a must-watch. Created during the heights of the Cold War, it goes further than any other film depicting a nuclear apocalypse by showing all potential consequences and after-effects nuclear war would bring.Watching humankind degenerate to its base animalistic nature, and seeing hundreds of years of human progress wiped out by the impact of the bomb and the subsequent nuclear fallout and nuclear winter, is horrifying. With Trump’s USA at loggerheads with North Korea hopefully Threads is the closest we’ll ever come to nuclear war.

Read more about Threads and why the world’s leaders need to watch it and learn.

This dystopian political thriller, made in 1980, is set in Britain in the near future. Following economic collapse and a bloodless coup, the country is now ruled by a dictator, a Prime Minister in charge of a totalitarian regime.

Any opposition is suppressed by a uniformed force, "The Guardians of the Realm", drawn up from former police officers and soldiers. They are the enforcers in society. A fragmented resistance movement "Quarmby", begins to emerge. Their controversial methods lead to them being labelled terrorists.

In a twist, this drama avoids the more usual formula in which the resistance movement is good and the state evil. Here, both the government and the resistance house members that are moderate or extreme, and both parties use questionable methods to pursue their goals. Can their means justify the ends? The moral complications make this a fascinating watch!

SS-GB is the BBC's more modern re-telling of ‘what if’ England lost the war, telling the thrilling story of a British homicide detective attempting to investigate a murder in a German occupied world.

In this alternate world Winston Churchill has been executed and King George is a prisoner with his wife and daughters on the run. Our protagonist is working on a routine murder investigation, but it attracts the attention of the German leaders when the victim is linked to British efforts to produce an atomic bomb.

Have these dystopian dramas captured your imagination? Check them out and more. >

How many of these dramas have you already seen? Did we miss one of your favourites? Let us know below in the comments.